Peace Declaration on the ROK-US Summit

The Korea Peace Appeal Campaign along with the South Korean Committee on June 15th Joint Declaration organized a press conference with religious and civil society groups ahead of the summit between the Republic of Korea and the United States calling for peace on the Korean Peninsula.

The first ROK-US summit since the inauguration of the President Yoon Seok-yeol was held in Seoul on Saturday 21 May. The agenda for the summit was known to include deterrence against the Democratic People’s Republic of Korea(DPRK), global supply chains, and the Indo-Pacific strategy. This summit was expected to be important as the Presidents of the two countries will discuss issues that will impact on making decisions on developments on the Korean Peninsula and in Northeast Asia in the future. With the failure to implement agreements between the two Koreas and between the DPRK and the United States, military conflicts and tensions on the Korean Peninsula continue to rise. If the two leaders at the ROK-US summit put their emphasis on foreign and military policies based on the US-led military alliance and on confrontation with and pressure on the DPRK, tensions on the Peninsula will increase and conflicts with neighboring countries will inevitably intensify as well.

Accordingly, on Friday 20 May, 146 religious and civil society organizations joined the peace declaration released at the press conference.

The summit between the ROK and the United States under the Yoon and Biden administrations will be held tomorrow (21 May).

Religious and civil societies are deeply concerned about the ROK-US summit, the earliest summit to have ever been held  after the ROK President took office. Our concern is centered on the fact that this summit is being held during a complicated and challenging time when the world order is rapidly falling into a new Cold War.

Amid suspension of implementing agreements between the two Koreas and between the DPRK and the United States, competitive development of new weapons, and military tensions, the world is heading toward a camp battle with supply chain crisis, and nuclear weapons enhancement along with the COVID-19 and climate crisis. The United States invited the ROK to the NATO summit along with Japan, Australia and New Zealand amid the prolonged Ukraine crisis. The confrontation between the US-led NATO and Russia is expanding further. The U.S. invitation to Taiwan to the 2022 RIMPAC Exercise, the world’s largest international maritime warfare exercise, and the launch of the Indo-Pacific Economic Framework (IPEF) with the aim of reorganizing the supply chain to exclude China, clearly demonstrate that the US-China Strategic Competition is heading towards intensifying confrontation and conflict.

As such, the newly inaugurated Yoon Seok-yeol administration is facing complex domestic and international challenges. Nevertheless, the Yoon administration continues to place emphasis on the 'strengthening of the ROK-US alliance', and  has underlined that the 'ROK-US alliance forms the central axis of diplomacy' even before taking office. The new ROK government has not only proclaimed its intention to strengthen the extended deterrence between the ROK and the United States, including the deployment of strategic assets, but also included in its policy tasks the improvement of ROK-Japan relations without having any actual plans, raising concerns that it might lead to strengthening the ROK-US-Japan military cooperation. The new government is exacerbating tensions by putting regressive hostile policies as a prerequisite for inter-Korean relations arguing that 'the DPRK is the primary enemy' and that 'denuclearization first', rather than pursuing the agreements over the denuclearization of the Korean Peninsula earlier by the ROK-DPRK and DPRK-US.

Second, we urgently need to ease military tensions. Hard-line policies toward the DPRK, such as the deployment of strategic assets and the expansion of the  ROK-US combined military exercises, that are likely to cause a crisis should be suspended. If the US strategic assets capable of carrying  nuclear weapons are deployed and field-trainings of ROK-US combined military exercise are performed to strengthen the ROK-US extended deterrence, this will further increase military tensions, leading to the return of the Korean Peninsula back to the crisis before the 2018 inter-Korean agreements and the  DPRK-US agreements and a heightened nuclear threat on the Peninsula. The parties to the agreements need to stop all military action in the region that could provoke tensions and instead begin talks to improve relations.

We hope to create an order of peace and coexistence with an end to the war and confrontation.

Now, as the historical shift in the global order begins, ending the state of Korean armistice and establishing a peace regime on the Korean Peninsula will bring  and end to  hostile relations between the parties, including the ROK, the DPRK, the United States and China, and  creating a truly free and peaceful world order instead of a new Cold War, starting from the Korean peninsula, the last hot spot of the Cold War.

We strongly urge the Yoon and Biden administrations to take steps for peace as the Korean people wish for  peace on the Korean Peninsula. 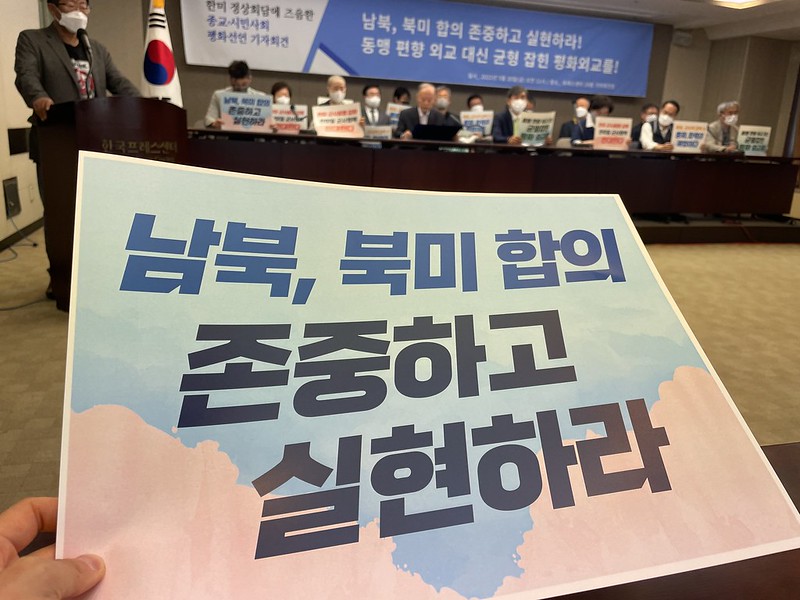