Let's stop hostilities and end the Korean War!
Listen to the people’s voices shouting for peace!

Today (July 27) marks the 69th anniversary of the signing of the Korean War Armistice Agreement. A long ceasefire continues, with no precedent in the world. Most of the people on the Peninsula have lived with the threat of war all their lives.

The unresolved Korean War and the Cold War structure of the Peninsula resulted in confrontation and an arms race. We have wasted our resources and budgets in preparation for a war that can happen again at any time, and don’t have enough to save the people and the planet. It's been 70 years. How much longer should we live in a vicious circle of hostility?

However, it seems that there is no hope of peace. Militarism is intensifying around the world, and conflict between the United States and China and confrontation between opposing camps are increasing. The Korean Peninsula is an area where an armed conflict is very likely to occur at any time. We cannot even guarantee that  the unstable ceasefire will remain in place if we move toward an increasing confrontation.

Amid the chaotic international order, the Yoon Seok-yeol administration is jumping on the bandwagon of the U.S.-centered camp faster than anyone else, narrowing its diplomatic options and endangering everyone. President Yoon and the ruling party took the lead in defining North Korea as a "primary enemy," and the Ministry of National Defense didn’t include the implementation of the Historic Panmunjom Declaration in the Military Domain from September 19, 2018 in its work report. There is only news about the introduction of advanced weapons and plans to build up military power. While the new administration said they will prepare a "bold scheme", the old-fashioned argument for denuclearization is unrealistic and empty. The spirit of the inter-Korean and the DPRK-U.S. agreements that denuclearization and peace can be created through dialogue, trust building, and reducing mutual threats is disappearing, and hope is turning into despair.

While the situation on the Peninsula is getting worse, the governments of the ROK and the United States are discussing ways to expand the ROK-U.S. combined military exercises, including resuming field drills, referring to the "normalization of those military exercises". When the world’s largest military exercises will be performed in August, it will inevitably increase military tensions. This will again lead to North Korea's nuclear and missile tests. Strengthening the implementation of ROK-U.S. Extended Deterrence Strategy, such as strengthening the nuclear umbrella and deploying U.S. strategic assets capable of nuclear weapons, will rather increase the risk of nuclear war on the Peninsula. Without stopping military actions and ending the vicious circle of hostility, the situation on the Peninsula may be hard to recover.

On July 23, more than 1,000 people from all over the country gathered at Imjingak ahead of the 69th anniversary of the signing of the armistice. In front of the DMZ, a symbol of division and confrontation, we cried out, "Let's stop the hostility! Let's end the war! Implement the summit agreements between the two Koreas and between the United States and the DPRK! Let's build peace on our own!" The Yoon Seok-yeol administration should listen to the voices of people who desperately shout for peace.

We have witnessed that sanctions and military pressure have not resolved the conflict for the past 70 years, and peace by force is not possible. We cannot expect change by repeating the same behaviors. Stopping hostilities and ending the war are the most fundamental solution to creating a peaceful Korean Peninsula free from nuclear weapons. If we really want peace, we need to prepare for peace, not war.

Thus, we firmly urge the Yoon Suk-yeol administration once again. 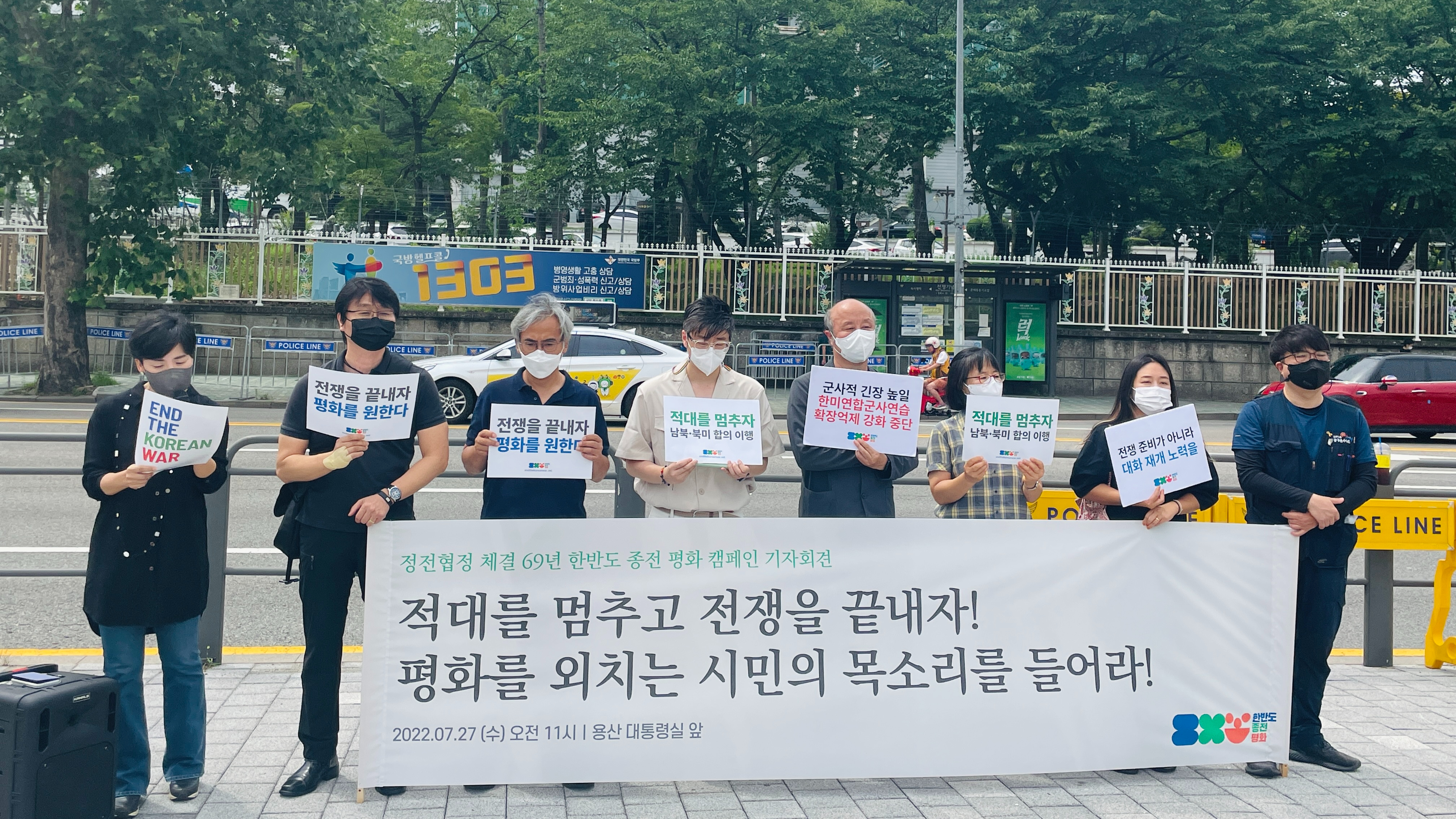 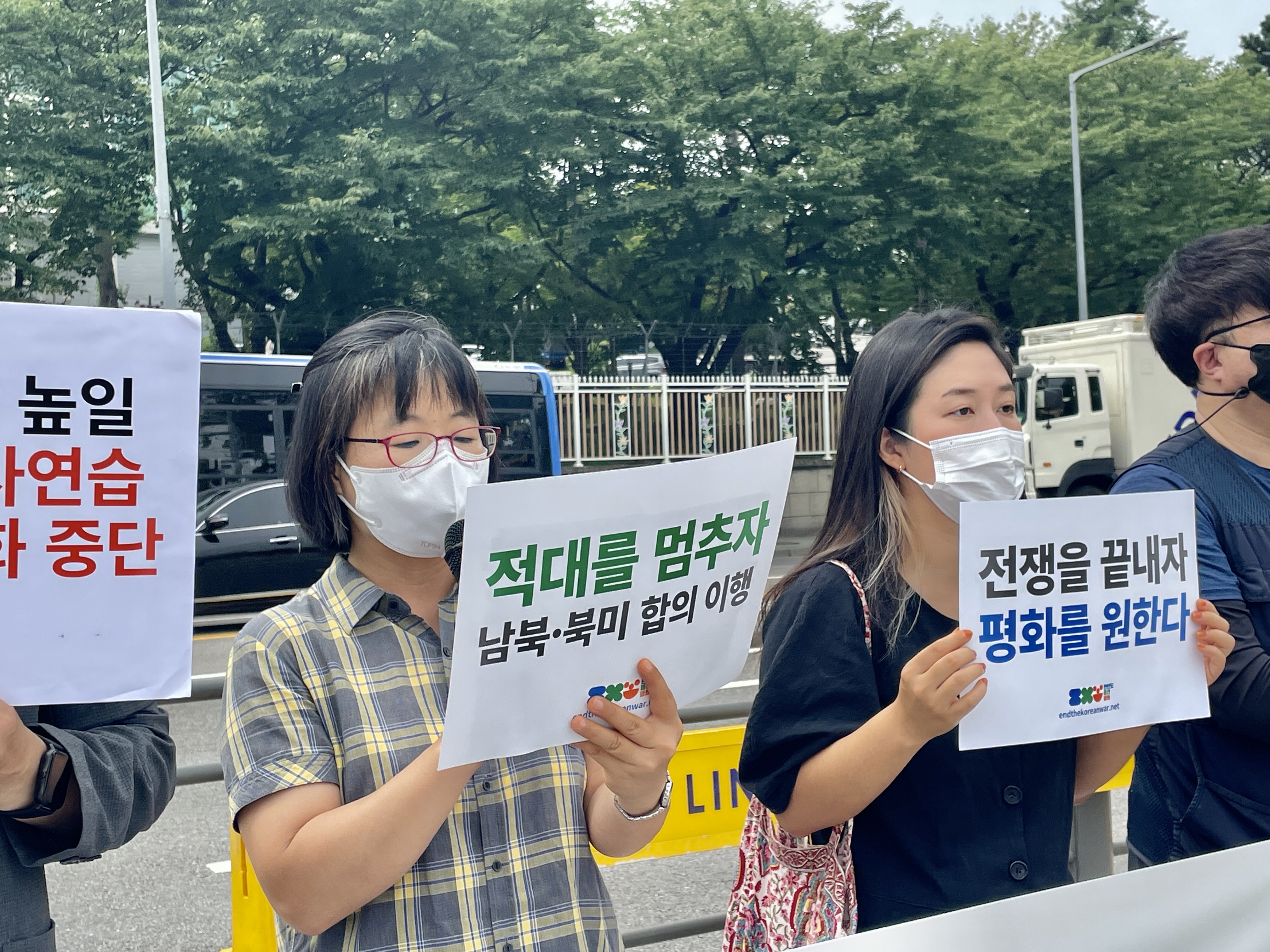