On 10 Jan, the Korea Peace Appeal Campaign and the South Korean Committee on June 15th Joint Declaration had a press conference <Let's work together to resolve war crsis and realize peace on the Korean Peninsula>.

Thourogh the press conference, we expressed concerns about the current crisis and strongly urged "to stop all military threats aggravating tensions on the Korean Peninsula, stop provocative actions and start crisis management together." 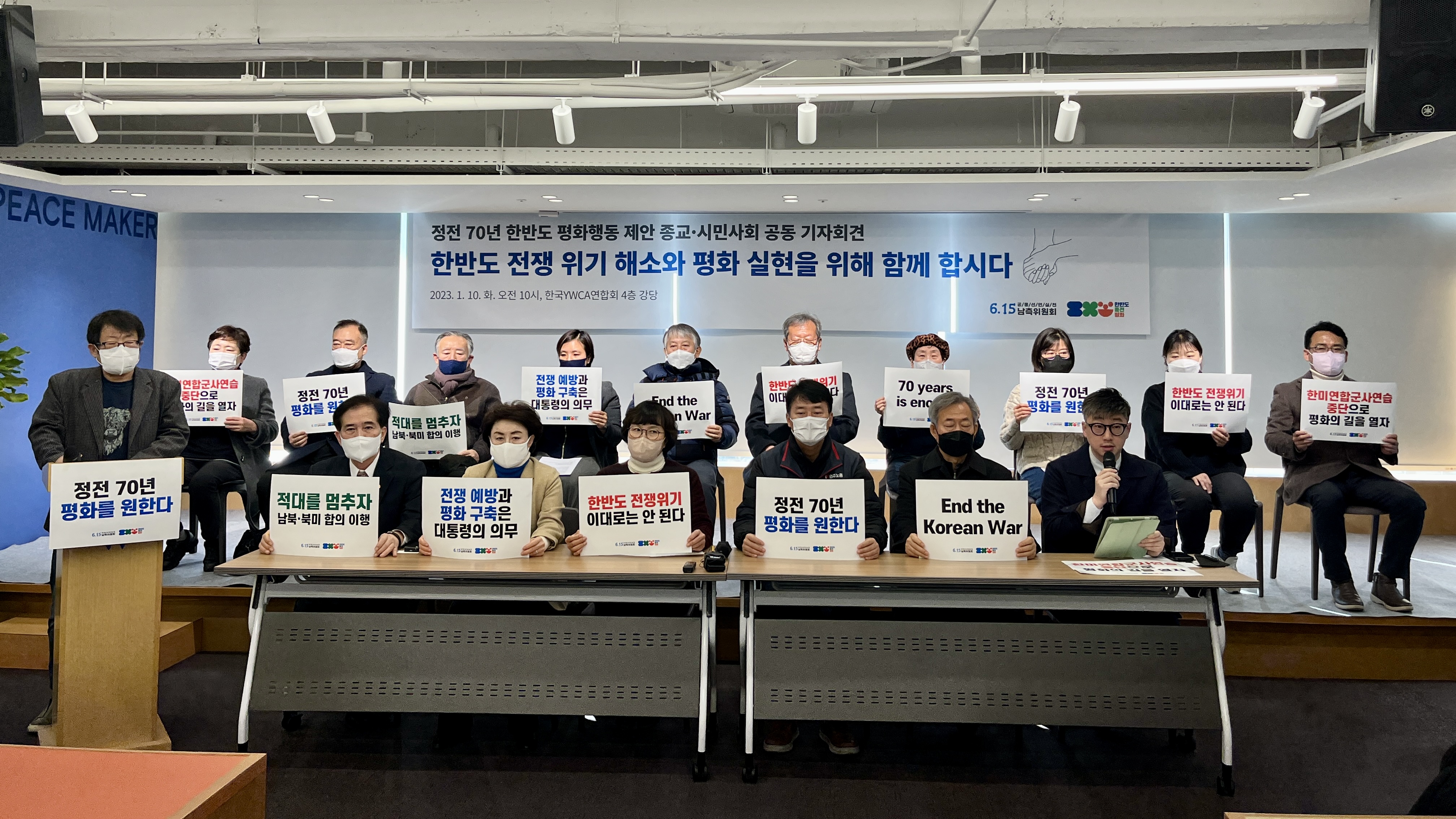 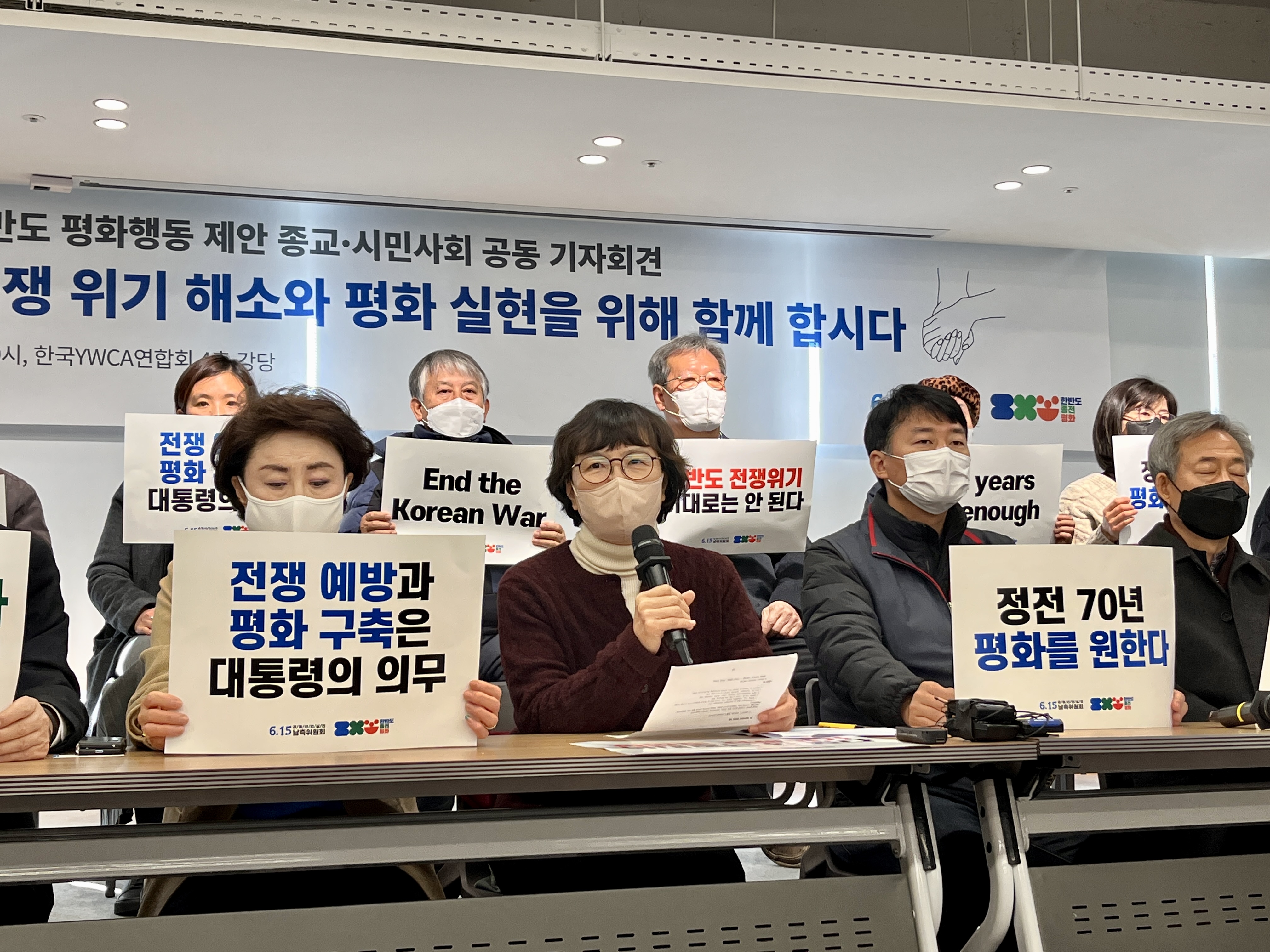 The new year has begun full of anxiety over war. The military crisis on the Korean Peninsula gets worse without an exit. The peninsula has reached a dangerous situation where tensions have simmered as all communication channels between South and North have been cut off. And a realistic solution to prevent armed conflict and rebuild the condition for dialogue is nowhere in sight. President Yoon Suk-yeol is creating more anxiety by continuing remarks such as ‘prepared for entering the war,’ ‘superior war preparation,’ ‘review of the suspension of the September 19 military agreement’ and so on. The Ministry of Unification is also raising tensions by mentioning measures like installing loudspeakers or allowing leaflets to be sent which might lead to clashes in the border area.

We gathered here today with a desperate heart of ‘No more war on the Korean Peninsula under any circumstance.’ It is difficult to predict what catastrophe will happen if any unexpected armed conflict should occur in a strained atmosphere. Amid a vicious circle in the form of a chicken game on the Korean Peninsula and deepening confrontation between the ROK-the US-Japan and the DPRK-China-Russia, Northeast Asia is increasingly becoming a powder keg of the world.

All military threats aggravating tensions on the Korean Peninsula must be stopped. We strongly urge that the parties concerned stop provocative actions and start crisis management together. Hostile policies and force projection operations can never be a solution but only worsen the vicious circle. The current crisis is the result of the collapse of mutual trust as negotiations have failed after the agreements were not kept and hostile policies continued. The hard-won inter-Korean and DPRK-US agreements in 2018 must be implemented. What we need are realistic measures and preemptive actions to ease military tensions and shift to a dialogue phase. In particular, the suspension of large-scale ROK-US joint military exercises will play a key role in improving relationships and setting conditions for dialogues.

We can't just stand idly by and let this crisis happen with anxiety. The more difficult it is to speak about peace, the louder our voice for peace should be. Moreover, this year 2023 is the 70th anniversary of the signing of the Korean War Armistice Agreement. However, even the 70-year-old unstable armistice cannot be guaranteed to remain the same in the future. It is a moment when the voices calling for no war and the realization of peace, as well as the efforts of civil society from all spheres, are more desperate than ever.

At this potential flashpoint a way out seems hard found, the South Korean Committee on June 15th Joint Declaration and the Korea Peace Appeal Campaign propose ‘2023 Korea Peace Action for the 70th Anniversary of the Armistice (tentative)’ and earnestly urge everyone who wants peace to join us.

To resolve the war crisis and realize peace on the Korean Peninsula this year, we are carrying forward

☮️ an intensive signature campaign to oppose the war and realize peace on the Korean Peninsula
☮️ demand to stop the ROK-US joint military exercises and ROK-US-Japan military cooperation
☮️ simultaneous peace actions in 300 places around the world including 200 Korean cities and towns
☮️ a massive peace rally and a march on 22 July, Saturday
☮️ a large-scale peace action around 15 August

Through this, we would like to resolve the war crisis and create a new turning point for peace as we meet people from all over the nation to firmly organize the voice of peace and stand in solidarity with people across the globe who want peace on the Korean Peninsula and East Asia.