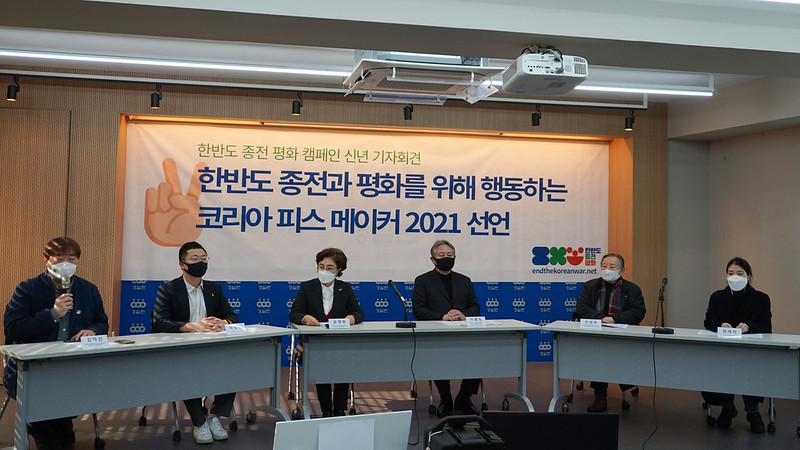 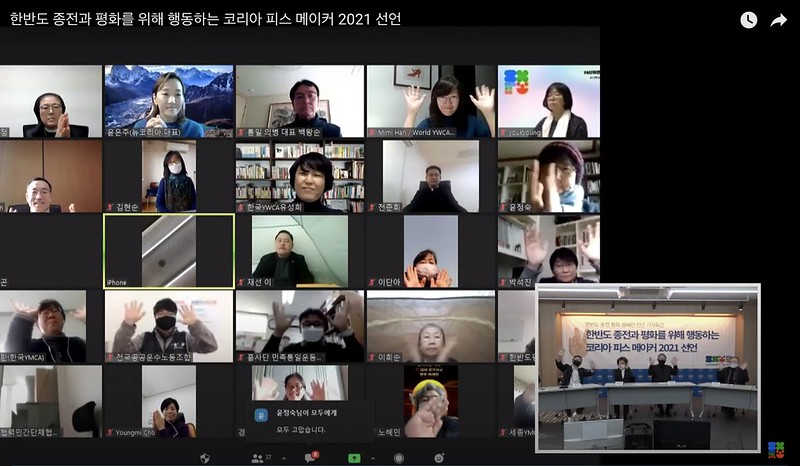 We started the global campaign of Korea Peace Appeal last year, on the 70th anniversary of the Korean War, when the peace process in the Korean Peninsula had ground to a halt despite great expectations from the Korean people and much interest from around the world. Our aim was to make the world listen and respond to the desperate cry from the people of the Korean peninsula, calling for an end to the War and building peace; “70 years is enough!” We were determined to end the War and confrontation. We launched the ‘Korea Peace Appeal’, a campaign “to end the Korean War and establish a peace agreement”, and “to create a Korean Peninsula and a world free from nuclear weapons and nuclear threat”. The campaign aimed to collect 100 million signatures and declarations of support from all over the world. The signatures and the declarations will be delivered to the governments of the countries involved in the Korean War and the United Nations in the hope of ending the War and building peace on the Korean Peninsula.

In 2021, the path to peace on the Korean Peninsula is uncertain. Chairman Kim Jong-un of the State Affairs Commission of the DPRK took a firm stance at the 8th Congress of the Workers' Party of Korea (WPK) to increase nuclear and missile capability as long as fundamental political and military issues were not resolved. While the Moon Jae-in administration has suggested to advance inter-Korean talks showing a willingness to end the Korean War, it has not  stopped the ROK’s arms buildup. U.S. President-elect Biden has been vague on whether he would implement the Trump administration's U.S.-DPRK agreement. The outlook, however, is not entirely bleak. Both Koreas and the U.S. have not closed the door to dialogue and have been willing to pursue diplomatic solutions.

The year 2021 will prove to be a critical juncture in the success or failure of the peace process on the Korean Peninsula. It is crucial to cast aside long-standing hostilities and distrust that surround the Korean Peninsula, and develop new relationships agreed upon in the Panmunjom Declaration and the Singapore Declaration. We must break the vicious cycle of the arms race and mutual threats, and take a big stride toward a peace regime and complete denuclearization on the Korean Peninsula, based on mutual respect and trust. People who live in both the South and the North of the Korean peninsula deserve to be able to enjoy safe and sustainable lives, free from the threat of war and confrontation, and to focus their efforts on overcoming the Covid-19 pandemic and economic crisis in cooperation with people around the world. If this year doesn’t produce any breakthroughs which resolve the accumulated distrust between the parties to the Korean War, the peace process on the Korean peninsula itself could collapse in a deadlock of confrontation and face even more severe crises than existed before the agreement was made.

Firstly, the hard-earned agreement between the leaders of the two Koreas and between the leaders of the DPRK and the U.S. should be respected and implemented by all countries concerned. The April 27th Panmunjom Declaration and the June 12th Singapore Declaration both confirmed that ending mutual hostilities and transitioning to a new relationship based on trust is the basis and the key to resolving the Korean Peninsula problem. The parties to the agreement must live up to this promise by action and not just words.

Secondly, the two Koreas as well as the DPRK and the US should immediately take practical measures to reduce the level of military threat. Any action threatening the other party with nuclear or conventional weapons must cease. Armament leads to more armament, and show of force leads to another show of force. The vicious circle must be broken now. The U.S. and the ROK, which have an overwhelming advantage in military power and military expenditure, need to halt their joint military exercises first, in order to promote trust.

Thirdly, a breakthrough in solving the problems of the Korean Peninsula should come through dialogue and cooperation, not sanctions and pressure. Dialogue and exchanges in various areas should be resumed, and those in the private sector in particular must be guaranteed without political and military prerequisites. The sanctions against the DPRK need to be eased on essential items, where the Covid-19 pandemic and flood damage have added to the suffering of North Koreans, and cooperation and confidence building should be encouraged. This will support to achieve meaningful progress on negotiations for a peace regime and denuclearization on the Korean Peninsula.

Fourthly, efforts to solve Korean Peninsula issues should be closely combined with efforts to eliminate the threat of war and nuclear weapons worldwide. It is not just people in the Korean Peninsula that suffer from the vicious circle of the arms race and the fear of war. Countries around the world including those involved in the Korean War, need to reduce their dependence on military means, especially nuclear weapons, and instead direct their efforts on behalf of people and the environment, which are suffering from the pandemic, the climate crisis, and economic crises sweeping the planet.

The Peace Campaign to End the Korean War, along with 2,969 Korea Peace Makers, are determined to make 2021 a decisive moment for peace on the Korean Peninsula.

Firstly, we will expand the signature-gathering campaign to the whole world and invite the people of the world to join in the Korea Peace Appeal Campaign. We will make sure that the voices for peace and the call for the end of the Korean War are heard.

Secondly, we will build a worldwide network of Korea Peace Makers who work for ending the Korean War and achieving peace. Starting with this declaration here in Korea, we will continue to organize various peace declarations to make it a global movement.

Thirdly, we will organize wider support for the Korea Peace Appeal from the National Assembly and local assemblies in South Korea. In cooperation with civil society across the country, we will urge the members of the National Assembly and local assemblies, heads of local governments and presidential candidates to sign the Korea Peace Appeal and to adopt a resolution for peace on the Korean Peninsula.

Fourthly, we will organize international peace actions to remember the important inter-Korean agreements and those between the DPRK and the U.S. Actions for peace will include an attempt to turn the 240km of the military demarcation line that runs across the Korean Peninsula into a symbol of peace, coexistence, exchange and cooperation.

Finally, we will pursue action to create a world of peaceful coexistence and cooperation. We will actively take part in international efforts to create a world free of war and nuclear weapons in particular, and join the global effort to reduce wasteful military expenditure and stop the destruction of lives and the planet and so create a peaceful and sustainable world where no one is excluded.

We sincerely appeal to all people worldwide to participate and pledge their solidarity with the struggle to end the Korean War and to achieve peace which has not been enjoyed for 71 years.