End the Korean War before the 70th Anniversary of the Armistice! 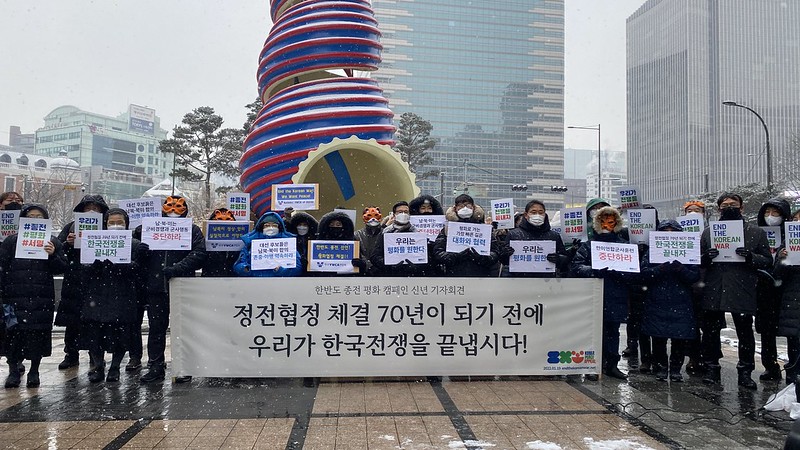 Let's End the Korean War Before the 70th Anniversary of the Armistice Agreement!

Let’s end the Korean War and establish peace on the peninsula with a bold step like tigers in 2022, the Year of Black Tiger. Let's banish hostility, distrust and the structure of the new Cold War and make a move towards reconciliation and cooperation, by ending the Korean War and the state of the armistice before the 70th anniversary of the signing of the Armistice Agreement.

We recall the overwhelming feeling when the leaders of the two Koreas announced the Panmunjom Declaration on April 27, 2018, which declared that there would be no more war and that a new era of peace had begun on the Korean Peninsula. In that year, the 65th anniversary of the armistice agreement, the two leaders agreed to declare the end of the Korean War and to replace the Armistice Agreement with a peace agreement, with the aim of bringing an end to the current unnatural state of armistice and establishing a firm peace regime. However, this is yet to materialize.

We, Korea Peace Makers who are intent on being the driving force for peace, rather than solely relying on intergovernmental negotiations, launched the Korea Peace Appeal campaign in July 2020 and have been actively engaged in trying to help achieve peace on the Korean Peninsula.  Even in the midst of the Covid-19 pandemic, we have continued to organize signatures and endorsements to the Korea Peace Appeal via campaigning on the street and online locally, regionally and globally.

South Korea will hold a presidential election in 2022. We urge all presidential candidates to actively engage in efforts to end the Korean War and achieve peace. It needs to remove the long-standing hostility and distrust on the Korean Peninsula and to develop the new relationships agreed upon in the Panmunjom Declaration and Singapore Joint Declaration. We need to break the vicious cycle of military tension and the escalation of the arms race, and make a bold shift toward trust-building and reconciliation and cooperation on the Korean Peninsula before 2023, the 70th year since the signing of the Korean War Armistice Agreement. Such a transition can serve as a political opportunity for the US-China competition to gravitate towards mutual respect and cooperation, rather than it moving towards a new Cold War.

A year ago, we urged newly elected US President Joe Biden to keep up the momentum created by the Singapore Joint Declaration, agreed by the leaders of the United States and DPRK(North Korea) and establish a new DPRK-US relationship. However, the Biden administration, while declaring that it is ready to engage in diplomacy and dialogue with North Korea without preconditions, still maintains a policy imposing increasing sanctions against North Korea in the name of democracy and human rights and isolating North Korea. The Obama administration’s policy of Strategic Patience failed to halt North Korea’s nuclear and missile programs, and military threats and sanctions only resulted in increasing military tension. The history of DPRK-US relations demonstrates that active efforts in confidence building have reduced crises and military tensions on the Korean Peninsula. Yet, the Biden administration procrastinated for a year, missing a golden opportunity to resolve the crisis on the Korean Peninsula, sticking to old policies which had failed in the past. Instead, during this period, we were faced with a situation in which confrontation and distrust between the United States and China increased in several fields, including politically, economically, and militarily. There is great concern that the US-China competition would solidify into a new Cold War on the Korean Peninsula under the state of the armistice, and in the region.

In addition, we are very concerned that missile launch tests of South Korea and North Korea respectively and an escalating arms race in the Korean peninsula would spark another crisis. The defense budget this year for South Korea, the world's 10th largest military spender, increased to around KRW 54.6 trillion. This amounts to 1.5 times the GDP of North Korea prior to the Covid-19 pandemic. The largest ever increase in defense spending and the introduction of state-of-the-art weapons during the five years of the Moon Jae-in administration have become obstacles to building trust and advancing the peace process on the Korean Peninsula. During the cessation of dialogue and negotiations, North Korea is focusing its efforts on increasing its military power, such as improving its missile performance, with the excuse of ‘securing self-defense’. It is foolish and risky to use the resources that should have been employed to address the Covid-19 pandemic and the climate crisis to provoke distrust and hostility between the two Koreas.

Ending the war and building peace on the Korean Peninsula will break the vicious cycle of the arms race and nuclear proliferation and reduce the risk of a new Cold War between the US and China, contributing to the creation of reconciliation and cooperation on the Korean Peninsula and surrounding regions. We remember the historic moments which heralded a new dawn of peace in the winter of 2017, when President Moon Jae-in proposed a postponement of the ROK-US combined military exercise scheduled to be held in the spring of the following year, and when in 2018, Chairman Kim Jong-un proposed that North Korea would participate in the Pyeongchang Winter Olympics hosted by South Korea. 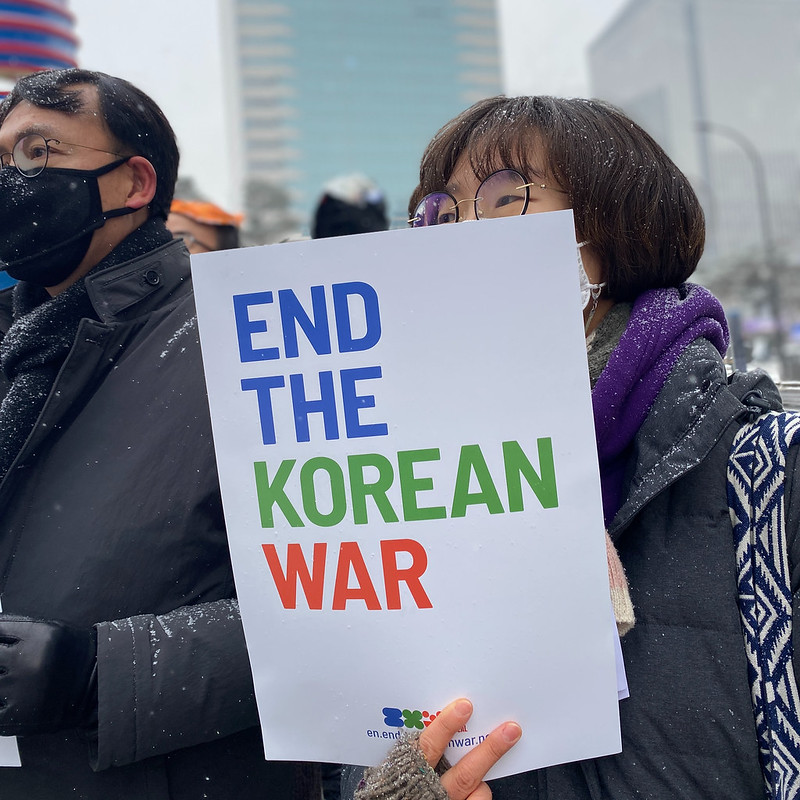 Let’s end the Korean War; seventy years is enough. We, Korean Peace Makers, acting for the proliferation of the ‘Korea Peace Appeal’, make the following demands with the will for peace of the people of the Korean peninsula and citizens around the world demanding peace.

South Korea, North Korea, the United States and China should formally end the Korean War before the 70th anniversary of the Armistice Agreement, put an end to the era of hostility and distrust, and make strides towards improving relations. Transitioning to a new relationship based on trust is the basis and the key to resolving the Korea crisis. We call on the international community to support the formal end of the Korean War, joining the journey for peace based on reconciliation and cooperation, rather than isolation measures and sanctions.

Humanitarian aid to North Korea should be provided at a level that enables North Koreans to respond to the Covid-19 crisis and the climate crisis. It should be provided regardless of political and military circumstances, at a sufficient level and in a timely manner. The international community should supply North Korea with vaccines and treatments necessary to respond to the Covid-19 pandemic and ease sanctions against North Korea to enable it to adequately react to the infectious disease and the climate crisis.

Efforts need to be made to initiate a real reduction in the risk of war by canceling the annual ROK-US combined military exercise scheduled to be held this spring and thereby easing military tensions. The vicious cycle of one show of force leading to another must now be broken. The United States and South Korea, which possess overwhelming defense budgets and military power, should take the initial steps to build trust by canceling the annual combined military exercise.

We urge the candidates in the 20th presidential election in South Korea to sign in the Korea Peace Appeal and lead to bring a formal end to the war and achieve peace. They must promise to respect and implement the hard-won agreements made between the leaders of the two Koreas and DPRK and US, including the Panmunjom Declaration and the Singapore Joint Statement in 2018. We urge them to present and push forward plans and policies to end the Korean War and move forward along the path, allowing  confidence building, reconciliation and cooperation on the Korean Peninsula before 2023, the 70th anniversary of the Armistice Agreement.

We, Korea Peace Makers, appeal to the people of the Korean Peninsula and peace-loving people around the world for joining our journey to bring an end to the Korean war and build peace on the Peninsula before the 70th anniversary of the armistice agreement by making the Korea Peace Appeal more widely known and expanding efforts to gather signatures. This year, let's finally put an end to the era of hostility and distrust and take a tigerish step forward into the era of reconciliation and cooperation 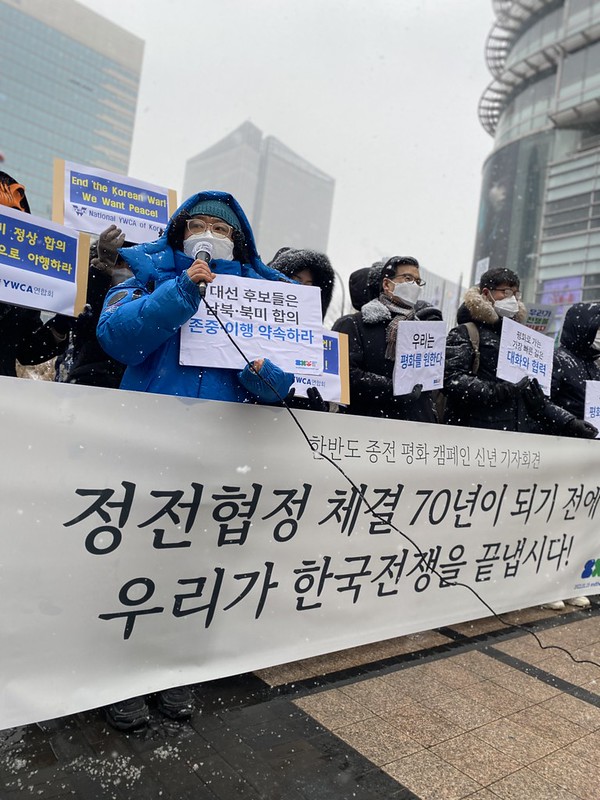 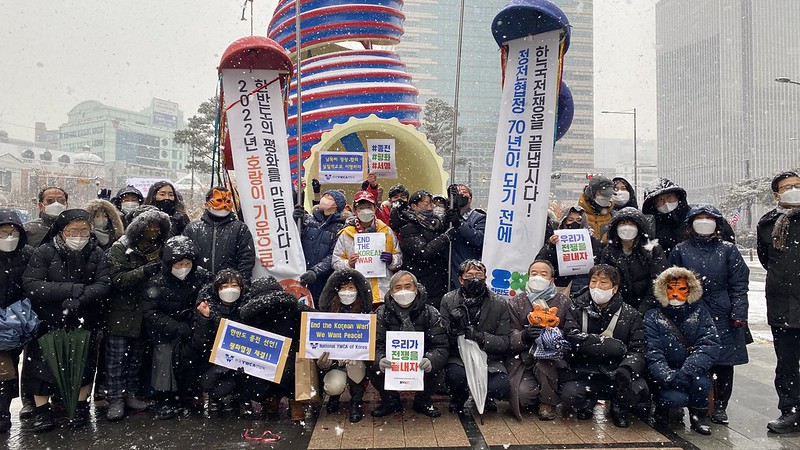